Great Britain’s senior men won the first of two back to back games with Poland, skating to a 6-4 success at Nottingham’s National Ice Centre on Thursday evening.

Coach Peter Russell was taking charge of the senior team for the first time since being appointed in January, with the side in the middle of a training camp ahead of next week’s World Championship in Eindhoven.

Britain made a bright start and tested Radziszewski in the Poland net several times in the opening minutes. After killing two penalties, Poland took the lead on their first powerplay in the 13th minute. 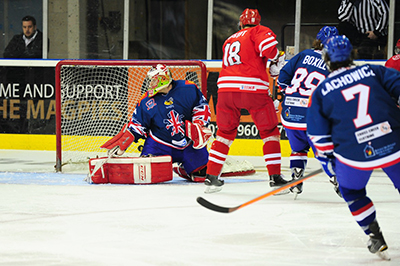 Marcin Koluz had his shot saved by Ben Bowns, but the GB stopper couldn’t prevent Tomasz Malasinski lifting the rebound into the net for the opening goal.

GB pressed and netted a deserved equaliser before the first interval. Mark Thomas and Robert Farmer had chances saved before former Nottingham junior Jack Prince was on hand to score into the roof of the net from beside the crease.

There was a similar pattern early in the second session, as Poland regained the lead at 25.29 through Leszek Laszkiewicz. Just over two minutes later, the sides were back on terms. Robert Lachowicz set up Mark Richardson for the shot from the blueline which was tipped in front of the net by Matthew Myers for GB’s second goal.

Inside the final two minutes of the period, there was a sense of deja vu as Mark Garside’s shot from the right circle was deflected in front of the goalie by Craig Peacock over the glove hand and into the net for 3-2 at 38.41.

With time running down in the period, Josh Batch played the puck towards the Poland net, where Radziszewski skated to clear it, only for the puck to rebound off a defenceman into the open net with just five ticks left on the clock. 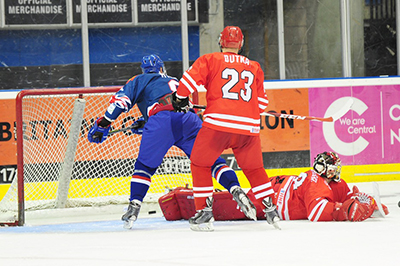 Poland started period three with a bang and reduced the arrears at 44.11, Grzegorz Pasiut with the final touch. As they’d done previously, Great Britain responded quickly to a Poland goal and they restored the two goal cushion at 46.21.

Matthew Myers and Robert Lachowicz had a two on one break and while their initial chance was saved, defenceman Paul Swindlehurst was the trailing man and he fired hard and low through the goalie’s five hole for a 5-3 scoreline.

With just over two minutes to play, and with an attacking zone face off, Poland took their time out and removed goalie Radziszewski in favour of an extra outskater.

As often happens the plan backfired as GB gained possession and after patient play, Jonathan Phillips pass was one-timed into the empty net by Matthew Myers for his second of the night.

There was still time for Poland to scramble a fourth with 72 seconds left but GB were not to be denied a satisfying win. 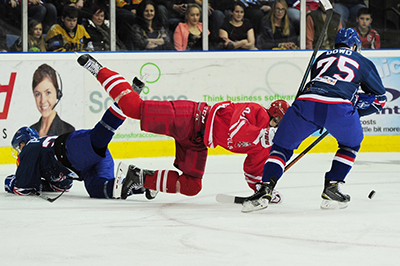 Speaking after the game, coach Peter Russell said: “I was very pleased with our work rate, character and of course I’m delighted to win the game.

“Defensively we were very strong and our powerplay looked in good shape. Poland are a very good team and we need to come back tomorrow and do it all again.”

The two sides meet again on Friday night at Coventry’s Skydome Arena, face off at 7.30pm. Tickets are available from the box office 02476 630 693 or check www.icehockeyuk.co.uk.

Some limelight in our new launch for this @TeamGBicehockey themed tee. We do something each year that people enjoy from GBs antics in worlds, so we HAD to make this 😂 It's a pre-order though. Closes on Friday and to be shipped around a week later! 🇬🇧 shop.crosscheckcloth… pic.twitter.com/oSif…