Olympic medallist Eve Muirhead has officially launched the Women’s World Championship being held in Dumfries in March and April this year.

The countdown is on to the IIHF Division 2A tournament at Dumfries Ice Bowl, which will run from from Monday 30th March to Sunday 5th April.

The Great Britain Women’s team will compete against top seeds Kazakhstan, plus Korea, Poland, New Zealand and Croatia to try and earn promotion to Division 1B.

Muirhead, the bronze Olympic medallist and Great Britain curling skipper, is acting as an ambassador for the tournament.

She said: “I am really impressed with the council’s Ice Bowl facility and their commitment to winter sports coaching programmes and developing access to sport for women.

“It is a privilege to get right behind this World Championship and to become a supporter of the Solway Sharks women’s team.”

GB will play all their fixtures at 8pm during the week-long event, which should encourage Great Britain supporters to turn out in force to get behind the host nation.

The attraction of this latest World Championship to Dumfries is yet another boost for the sport in the region and the council’s major festivals and events strategy.

Ice hockey is buoyant in Dumfries, with the highly successful Solway Sharks senior and youth teams and Scotland’s only women’s team all based in the town. 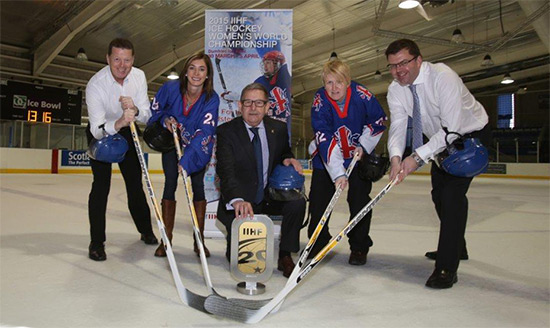 The World Championship is being jointly organised by the council and Ice Hockey UK on behalf of the International Ice Hockey Federation.

This enhanced provision will further promote the Ice Bowl as a premier facility for ice sport across the UK. This will enable the council to bid for future world championships and playoffs.

Councillor Colin Smyth, the council’s events champion, said: “It is a superb accolade for the council to be entrusted to co-manage the 2015 Women’s World Championship tournament.

“It is a wonderful testimony to council staff and our investment in the sport that we are gearing up for our fourth World Championship in just two and a half years.

“It will be great to welcome national teams from as far afield as Korea, Kazakhstan and New Zealand to Dumfries.”

Andy French, general secretary of Ice Hockey, said: “Ice Hockey UK is committed to supporting the development of women’s ice hockey and we are delighted to be returning to Dumfries for this World Championship.

“Ice hockey is a fantastic sport to watch and play and we know that after previous tournaments in the Ice Bowl, participant rates have increased dramatically.

“We are hoping for that kind of legacy again as well as a compelling week of action.”

The event has secured up to £19,000 in funding from EventScotland, the events team at national tourism body VisitScotland.

“These championships will undoubtedly be a fantastic spectacle, attracting visitors from outwith Dumfries & Galloway to take in the action.

“Events like this are key in driving domestic tourism, which in turn delivers significant economic impact for the area.”

Tickets for the tournament are now on sale and range from just £4 for a single match ticket to £25 for the full week championship pass.

There are generous discounts available for group discounts and all under-16s go free with ticket purchasing adults.

Tickets are available from the Midsteeple Box Office and Ice Bowl and by clicking here http://www.ticketweb.co.uk/sports/ice-hockey/9/events online.

We are saddened to learn of the passing of His Royal Highness The Prince Phillip, Duke of Edinburgh, earlier this morning. Our thoughts are with Her Majesty The Queen and the Royal Family at this time. Rest in peace. twitter.com/RoyalFam…

On Easter Monday, Lockdown Hockey returns to the GBSC Facebook Page. At 5pm we will be re-playing the Great Britain v Poland game from 2018 This will be the full game streamed "As Live". We look forward to seeing you all on Monday for Hockey and the remaining Easter Eggs !! pic.twitter.com/g8iw…

This Sunday, Lockdown Hockey returns to the GBSC Facebook Page. At 5pm we will be re-playing the Great Britain v Italy game from the 2018 IIHF World Championships in Budapest. This will be the full game streamed "As Live". We look forward to seeing you all on Sunday ! pic.twitter.com/OtEz…

On Easter Monday, Lockdown Hockey returns to the G